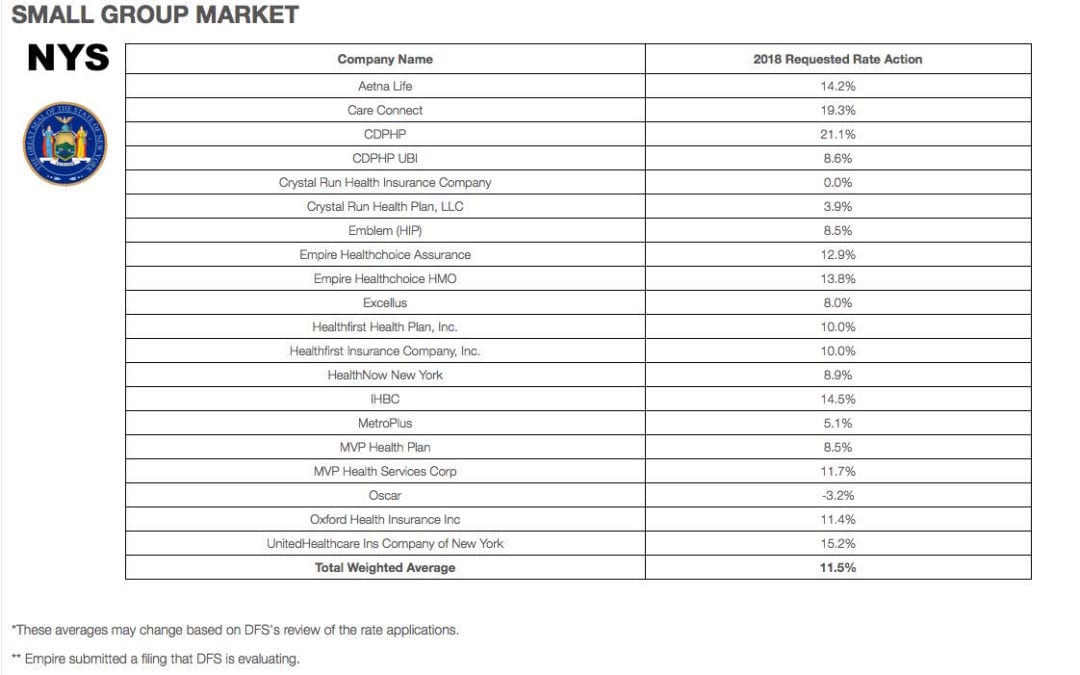 Yesterday, NYS 2018 Health Insurance Rate Filing were released. The total weighted average increases were 11.5%  small groups and 16.6%  individual market.  This early filing request deadline request requirement is not an Obamacare requirement.  As per NY State Law carriers are required to send out notices of rate increase filings to groups and subscribers.

These are simply requests and the state’s Department of Financial Services has authority to modify the final rates. But they are the first indication of what New Yorkers can expect when shopping for health insurance on the individual marketplace at the end of this year. The news comes as insurance companies across the country brace consumers for another year of large rate hikes, owing in part to the composition of the individual market, and in part to the uncertainty over the future of the law under the Trump administration.

With only 3 months of mature claims in 2017 to work of off Insurance Actuaries have little experience to predict accurate projections. Simply put the less credible information presented to actuarial the higher the uncertainly and higher than expected rate increase.  The national rate trend, however, has been much higher than in past years due to higher health care costs and the loss of Federal reinsurance fund known as risk reinsurance corridor.

Individual rates are expected to be higher than small group. The national rate trend, however, has been much higher than in past years due to higher health care costs  Like other states throughout the nation, the 2018 rate of increase for individuals in New York is higher than in past years partly due to the termination of the federal reinsurance program.  The lost of the program’s aka federal risk reinsurance corridor funds accounts for 5.5 percent of the rate increase.

This is one of the reasons why the individual market is significantly more costly to operate than small group as per recent Aetna and United Healthcare pull out of most State Individual Exchanges.   Another local example was last year’s Oscar Health Insurance which had lost $105 million and is asking for up to 30% rate increase.  The 3 year old company  said the increase was necessary because medical costs have risen, government programs that helped cover costs are ending, and its members needed more care than expected.  For 2018, with successful pivotal changes Oscar is asking below average 11% individual increase and a decrease of 3.2% small group next year.

While small group rates are better risk and naturally lower rates.  There is some rate shock with notably Careconnect.  CareConnect, the financially struggling health insurance arm of Northwell Health, has asked the Cuomo administration to allow an average 30 percent premium hike on the individual market in 2018. The company, which lost $157 million in 2016, is asking for small group increases that range between 9 and 24 percent. THE THREE R – RISK CORRIDOR, RISK ADJUSTMENT & REINSURANCE designed to mitigate the adverse selection and risk selection. The problem, according to many insurance companies, is that the formula is flawed, and CareConnect executives have consistently complained that they are at an unfair disadvantage. The Cuomo administration has taken steps to ameliorate some of those problems, giving the DFS the authority to essentially overrule the federal numbers.  In its first-quarter financial report, executives made clear that the risk adjustment penalty was a threat to its business.

Instead, the correct approach for a small business in keeping  with simplicity is a Private Exchange.  This is a true defined contribution empowering employees with choice of leading insurers offering paperless technologies integrating HRIS/Benefits/Payroll.  Both employee and employers still gain tax advantage benefits under the business.  Also, the benefits, rates and network size are superior under a group plan as THE RISK OUTLINED ABOVE ARE HIGHER FOR INDIVIDUAL MARKETS THAN SMALL GROUP PLANS.

You may view the NYS 2018 Rate Requests DFS press release, which includes a recap of the increases requested and approved by clicking here.

For a custom analysis comparing PEO with YOUR upcoming 2017-2018 renewal please contact our team at 36PEO (855)667-4621.  We work in coordination with Navigators to assist with Medicaid, CHIP Child Health Plus, Family Health Plus and Medicare Dual Eligibles.   We have Spanish, Russian, and Hebrew speakers available.  Quotes can also be viewed on our site.

*These averages may change based on DFS’s review of the rate applications.

** Empire submitted a filing that DFS is evaluating.